The great thing about the Samba Sisters is the women in the band are all so different and come from all walks of life. Being a Samba Sister is a great experience, where you can be yourself, have some fun and make some great new friends.

Here you can meet some of The Samba Sisters 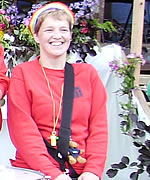 I have been drumming for twelve years, so you would think I would know what I was doing by now!

I was a member of The Belties in Castle Douglas before we split the group in half and I then became a Samba Sister. I enjoy the performances we do whether it is busking on the street or on a proper stage because I am a wee bit of a show off!

I enjoy getting to play all the different drums but you mostly see me on surdu, rep or hand percussion and I even get to lead some numbers. It’s great being a part of the band. 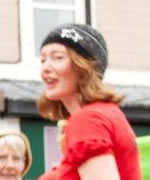 In 2004 I read an article about the Samba Sisters in the local paper and decided just to walk in on one of their meetings the following week (I’ve since found out that this is not strictly allowed!). Having moved to this rural area after living in various UK cities and raising a small child, I was feeling a little isolated.

Thankfully the Samba Sisters recognised I had rhythym (I have played with various musical groups in my past) and I’ve been proudly making a loud noise with the Sisters ever since. 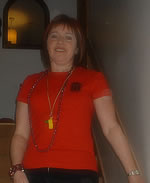 Hi, I’m Alison, I’ve been a Samba Sister for 6 years now and still love it!

Monday evening is  one of the rare “me” slots ; it’s a really energizing start to the week!  It all started when I joined in a kid’s drumming session at Kirkcudbright (there were spaces for adults too, honest!); then I heard some fantastic drumming sounds when I passed Gracefield one evening. Shortly afterwards, I saw an ad in the paper for the “Come and try Samba drumming” … the rest, as they say … is great fun and friendship! 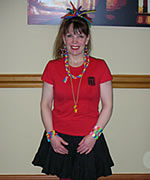 Hiya, my name is Hazel and I’ve been a Samba Sister since September 2005. I always loved music at school but was no good at the piano, guitar etc. I liked singing but I always loved working with percussion. I saw the Samba Sisters busking in the town centre one day and I just felt so excited by the rhythm that I just had to move and dance to it’s amazing sound.

I knew right then that I had to be part of  this FABULOUS group of girls. I recognised one of the drummers and caught her eye and she told me that they would be having a recruitment drive that September. I joined and have loved every minute of it since.

I love the feeling of the beat of the music and the adrenalin rush when we perform. The fear of leading one of the numbers and the friendship and support of my fellow sisters. We have played in some interesting places and I hope that more people will recognise us and come and listen to us play and ‘who knows’ Maybe even have that same irresistible urge to join us as a SAMBA SISTER.

Hi, I’m Carol, a mum and housewife who until September 2006 had never played an instrument in her life! It was then that I went along to some workshops that the Samba Sisters were running.

I had heard them play in the Guid Nychburris parade that year at that was it … I wanted to do it!

I’ve been in the band ever since and from street playing to Cabaret and Nightclubs in rain, hail or shine – I love it. The Samba Sisters are a great band of girls and I’m proud to be one of them. 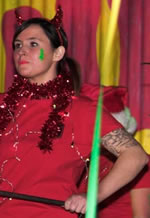 My tastes in music cover quite a large variety, including most genres from classical to heavy metal/hardcore. So when in 2005 I saw a Samba band play in Dumfries High Street, the music hit me hard! I loved the energy, rhythms and spellbinding beats. Some time later a friend introduced me to the Samba Sisters and the rest, as they say, is history.

The Samba Sisters are a great group of women from a mixture of ages and backgrounds. We love playing and socialising together and I can’t imagine my Monday nights without them!

I saw the Samba Sisters perform on the Whitesands as part of the lantern parade for Homecoming Year in January 2009. Their energy and enthusiasm impressed me and I thought it would be great to have a go. Later in the year I saw that the group were running a series of free workshops and went along…

I never expected that a few months later, I would be performing with them on the streets of Dumfries. I played the piano in the past and enjoy singing, but have always been drawn to percussion. It has been wonderful to find that it’s not too late to learn new motor skills!

On a Monday night I leave all my cares behind and live in the moment. There is something very uplifting about playing these wonderful Samba rhythms and also in the company of my new friends. It hasn’t all been Samba either… the past year has found me shaking a tambourine as Siouxsie in Strictly Decades and posing naked (except for a pair of drumsticks) for a fundraising calendar. I loved performing this summer at galas and festivals, and especially on the bus around Glasgow…what a buzz! Thank you, girls!

I did a degree in classical music millions of years ago, and was a piano teacher once.  This all disappeared after a bout of encephalitis in my twenties, which resulted in a year’s recovery of basic coordination but not, alas, piano-playing or other matters of finesse or fine motor skills.

I’ve done an assortment of work since then (TV sound editor, stand-up comic, Fair Trade importer), but now decades later, I’ve realised that music is too gorgeous and too much fun to pass by.  Grab it in any form you can, that’s what I say.  In that spirit, I now play snare drum with the Samba Sisters, and it is pure joy.  I also sing really loudly when driving, windows open and all, and I just don’t care any more.  Belt it out, you’ll feel better for it.

One Monday in September 2009 my friend and I were leaving work.  She was in a hurry to get to a drumming workshop and asked if I’d like to go along.  I hadn’t a clue what it was about but thought it sounded interesting so tagged along.  The Samba Sisters were such good fun and so welcoming I decided to carry on after the end of the workshops.  Since then I’ve joined them playing at numerous gigs (outside in all weathers) and 2 stage performances.

I’d never played musical instruments since the recorder at school and certainly never played percussion, so it’s been a totally new experience which I’ve thoroughly enjoyed.  My family are grown up and moved away and I enjoyed their initial reactions when I told them I was going drumming – (pause) —“You’re WHAT?” They’re used to it by now and have managed to see and enjoy some of our performances.

The Sisters are a great group of women, all ages and backgrounds and we have one important thing in common – we love coming together to learn and play Samba music

I joined the Samba Sisters – we were the “Belties” then and met in Castle Douglas – in 2001 and left in 2006 due to family commitments.

When I joined again in 2011, it was a bit nerve racking but I felt very welcomed both by members I already knew from before and by those I met for the first time.

I really enjoy that the band are very involved now in the community and we play at festivals and gala days all over the region, as well as at charity occasions. 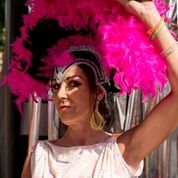 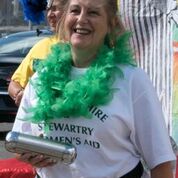